Strack's Closes Four Stores, Including One In Merrillville

Vice President of Human Resources Derek Kinney said the supermarket chain was shutting down the decades-old Merrillville location. Also included in the closure are four Illinois stores, including a Strack and Van Til and an Ultra in Chicago. He said it was a difficult choice the company had to make because these locations couldn't meet quota, and their leases were soon up.

Kinney stated that they're "very saddened having to do this," and he continued to thank Strack and Van Til customers for their support, and workers for their hard work.

Somewhere around 460 workers at the closing supermarkets will lose their jobs. Kinney also explains that the company is trying to relocate as many employees as possible into other nearby Strack and Van Til stores. 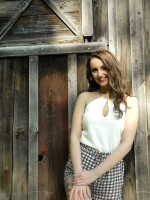 Sara Dykstra
Sara Dykstra is a 21 year old intern at Lakeshore Public Media, where she is just beginning to pursue her dream in public media. She graduated from Kankakee Valley High School in Wheatfield, IN in 2016. This is where she realized her love and passion for Radio/Television broadcasting thanks to her Teacher/Mentor, Jeff Martin, who is the Radio/TV Broadcasting instructor at KVHS. She is currently employed at The Home Depot in Valparaiso where she loves her job and the perks of customer service. Along her journey she has won numerous awards for publications including the following: 1st place in Chronological Yearbook Design at Franklin College's IHSPA (Indiana High School Press Association), 1st place in BPA (Business Professionals of America) Regional's for News Broadcast Team Production (2014 & 2015), 2nd place in BPA State for News Broadcast Team Production (2016), Top 25 in the Nation for BPA News Broadcast Team Production, Best Actress Award for High school Film Festival (2015 & 2016).
See stories by Sara Dykstra
Latest Local and National News